Cancer in prime time television is a mixed bag.

Snarkologists will recall the amazing case of the beauteous Izzie Stevens on Grey's Anatomy. Diagnosed with melanoma that had spread to her brain (clearly child’s play), she was given only a 5 percent chance of survival — and survive she did.
After that there’s no place to go but up, so when I heard that the writers of Parenthood were bringing breast cancer into the lives of Kristina and Adam Braverman, I pounced. The show has taken on autism, substance abuse and adoption in past seasons.
Parenthood is a multi-generational saga where all the adult children and their spouses, ex-spouses, live-ins, children and soon-to-be fur children live in the same town as Mom and Dad, just like the rest of you do.  In my family everyone moved straight out of Dodge after high school, which is why my family has not been and never will be the model for a television show.
No matter.  A typical Parenthood show zooms in and out of each character's world and includes “real life” situations like freak-outs over Dad’s failure to renew his driver’s license,  children with stomach aches the first day of school, work woes for the single parent Sarah with Ray Romano in a new career low as her photographer boss, anal over-achievers who schedule everything on their iPhones and sub-optimal, under-achieving ones, who laugh at the anal ones yet forget to pick up the kid at school.
Just my kind of show.  Now bring on the cancer.
Which is exactly how it happens in the real world.  One moment you’re swimming along in the stream of life then in the next cancer drops into your world like an atomic bomb. Your thinking explodes into a million bits, while at the same time, you strive mightily to keep your formerly normal face in place.
In the lull before the storm Kristina and Adam argue in bed about getting a dog.  I swear this is a conversation DH and I had years ago, before Fur Child #One.
“He’s going to crap all over the place,”  Adam says.
“So what? So do you.” So much for wifely humor. “I’m teasing.”
By the time that episode is finished, we see Adam and the kids looking at puppies when Kristina drives up after a medical appointment that clearly went the wrong way.  She knows what we know. This is when we see, in slow motion, how their world is about to be turned upside down.  You can see the knowledge that his wife has just been diagnosed with cancer sinking into Adam’s face, bit by bit.
Is that what it looked like, I wondered.
It certainly felt real.
What didn’t feel quite as accurate were scenes with the two different physicians, stereotypes squared, that Kristina and Adam consult.  One is abrupt, hurried, obnoxious.  He tells Kristina she has an early stage breast cancer that should be removed right away and oh, by the way, he has an opening at 8 am Friday.  Color us surprised.
His polar opposite is a female physician with a consulting room straight out of Architectural Digest.  Oh, for that sofa.  She’s on emote control, empathy and confidence reverberating in equal parts. 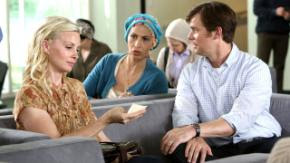 In the interim, Kristina has coffee with another breast cancer patient, who seems to know exactly what Kristina needs to do and tells her so in no time flat.
What?  Really? This is when I remember it’s television.  The support of survivors is essential, but if someone I’d just met was in my face to that degree in the week following my diagnosis she would have been talking to the hand.  My ears would have sewn themselves shut.
All these nuances.  There is never going to be a television portrayal that really “gets” cancer.  Every year some 230,000 women are diagnosed with invasive breast cancer.  That means that are that many stories plus those of their friends, families, and the people that care for them. Everyone has their take on what is real about cancer.
There are two thing though, that need to undergo a seismic change across the cancer culture, from co-survivors to educators to nurses to social workers to doctors.  The first is  the notion that the internet is armageddon.
“You’re not doing what the doctor said you’re not supposed to do are you,” Adam says when he finds Kristina web surfing.
The internet is not the enemy. The internet is not going to create fear in a patient.  The fear following a cancer diagnosis is part of assimilating new and difficult information. Patients are going to surf the internet for medical information in the exact same way that teenagers are going to pick pimples.  It is going to happen.  They are especially guaranteed to search, in fact, in absence of other information.  If the physicians we turn to aren’t routinely sending their newly diagnosed patients home with a list of excellent web sites (that is if the physician doesn't have his or her own!) on breast cancer, and many helpful books as well, then part of the job has gone undone.
The other seismic shift, equally shared in medical culture, is how to play the role of positivity in dealing with illness.  Most women diagnosed with breast cancer aren’t feeling sick to begin with.  They walk from the land of the well into the land of the bald, the nauseated, the medical record number, the breastless and the reconstructed. Then they are encouraged to stay positive about all this, as if failing to do so will somehow impede their survival.
Think about that.  It makes no sense.
This plays out as Adam and Kristina navigate the first murky, anxious days following the consults.  When he finds her surfing the web, he reminds her that she needs to stay positive.  Here’s what happens later.  This is scene scripted from any cancer patient’s life.
To the writers and cast of Parenthood?  Well done.
“You just have to let me be scared.”

Terrific post, Jody. I always think of cancer portrayals like opera - no matter what, you know she's going to forgive the creep, no matter how he's wronged her, even as she's lying on her death bed. The TV/film cancer girls are always gracious/noble/kind/ understanding & of course, BEAUTIFUL.

My onc. actually suggested that I go home & get online. He just cautioned me about making sure I was getting good, well-documented information. Then he gave me a few sites to start with. One of the great things about BCSM is that we can all draw on so much good information. None of us can know everything, but we can all pool our knowledge. Together we can create something useful - thanks.

Your usual insightful and awesome. Thank you!

Thanks Jody! I wish I had seen this so I'd have something useful to say. It is on the radar!

Jody,
Typically I don't care for TV's "fantasy cancer" portrayals. Still, I think it's good the topic is at least being tackled. Sometimes it will be done well and sometimes it will not be. Thanks for your great insights. I am sort of curious about this show now...

Really well done. I did not see the original program but you certainly made clear the issues.
Few doctors will even begin to explain the natural strategies that may prove so helpful while going through conventional treatments.

Thanks for all your comments. I love it that Julie's oncologist suggested she go on line and even indicated where to look. That's smart. It's terrific when you can work in partnership with a doctor and share information.

Nancy, I was thinking that by it's very nature no one's cancer is going to look like the experience felt, unless it's a documentary. Have you seen the video diary on Farrah Fawcett's that was done by her dear friend Alana (I believe that's her first name) Stewart? That was the real thing up close and personal....when the real thing includes the ability fo fly by private jet to Germany for treatment. So even there the case was far from the norm.

And Annie, yes, in the case of this particular episode the surgeon barely explained the cancer, not to mention any kind of supportive strategies.

Thanks for reading friends.

Oh I love that line, "You just have to let me be scared." I'm a Hodgkin's survivor and the well-meaning but "stay positive" message over and over was crazy repressive and not what I needed. I needed to hear, "this is scary and it sucks and I'm here to listen" which I heard from exactly no one.

Jody this is a great post with very insightful comments. Thank you!

interesting! although I have no expert, but I want have to know more and more, on your blog just interesting and useful information. Keep it up!human growth hormone

Thank you Alicia, and @a4tc:) I have to tell you I loved the passion and honesty of a dear friend's husband. We were standing and talking about it after chuch on Palm Sunday. Jim looked at, it was clear he was upset, but I loved this, "He said, Jody, you just gotta get throught this. That's all there is to it."

You know what? That was perfect for me at that moment. It might not have worked for someone else. But yes, I needed to get through it and that I did.

Thanks all for your thoughts.

I love this post, Jody. It is insightful and on the mark. You are right about most TV portrayals of cancer. Most shows cannot capture cancer even remotely. I wrote a post about a Desperate Housewives storyline that dismissed a character's cancer after she was "cured." http://bethlgainer.blogspot.com/2012/04/cancer-fallout.html

Cancer is a type of disease where there is uncontrollable cell growth. Breast cancer is a type of cancer which affects breast part of the body. The size, stage, rate of growth, and other characteristics of a breast cancer determine the kinds of treatment. Treatment may include surgery, drugs (hormonal therapy and chemotherapy), radiation and immunotherapy.
cancer treatments centers

No problem with shows having breast cancer as one of their themes. I just suggest that they show some ways on how can Big C patients fight cancer, say breast reconstruction, breast lift and the like.