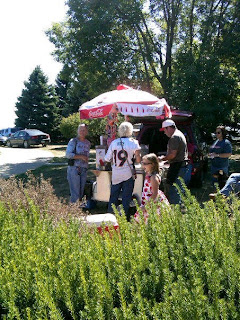 A week ago I woke up in western Iowa, on the northern edge of town, to an absolutely picture-perfect morning.  It was the kind of day you want to steal. I was at my father-in-law’s home and we were about to watch a way of life, part of an era, evaporate in front of our eyes.
It was auction day.  We had already moved my 89-year father in law into a senior living apartment two days before. The things various family members wanted, a particular rocking chair or trunk,  were packed in their cars, trucks, and trailers. And beginning at 8 am sharp, the crew from the auction company carted out everything that remained from my in-laws’ 3000 sq. ft. house, from attic to basement, soup to nuts.  By the time people started to gather, everything would be neatly stacked and arranged on tables that extended some 100 feet down the driveway, where a 1950’s red formica and aluminum breakfast table that would have been perfectly at home on the “Leave it to Beaver” set was the first to go.
In smaller midwestern communities and towns, where life moves just that much slower, auctions are social events. Even the friendly hotdog vendor showed up. So did his friends. Neighbors stopped by. Some were curious.  Some were peeved that they’d never seen my father-in-laws workshop or that the drill press was already gone. Friends of the auction crew came.  Everybody knew someone.  By the time the afternoon was out every shred of paper, furniture, plates, tools, even Mason Jars and thousands of kitchen and carpentry doo-dads would be gone.
My in-laws made things with their hands. Literally.  After having the house framed, my father-in-law did all the finishing work himself. They gardened.  My mother-in-law canned the tomatoes and froze sweet corn. Her college degree was in home economics, and items assembled on the tables reflected that. Milk glass plates and cups for bridge parties.  Boxes of old Simplicity patterns. Stacks of matching linen napkins, the creases from ironing still in place. They understood their time, their place and enjoyed their lives.
With one strange exception, something my generation and those following, will never understand completely: they also never threw anything away. The products they bought had been built to last.  And they did. Consequently a 1950‘s vegetable ricer, with a wooden pestle, has now found a new home.  Someone bid on it and carted if off that afternoon.  And so it goes.
Nostalgic?  No, not at all.  LIfe is constantly cycling around us. Everything has its season.  But it is unusual, to see the items of anyone’s  life laid out for all to see in this fashion.
As we started the drive back to Texas the next morning the wind kicked back up again.  Gusts came across rolling fields that looked like rippled quilts. I’ll remember that last glance, the sharp blue sky, terraced fields stretching forever, and one one small cloud, adding a spec of perspective to all that remained.

I can relate so well to what you have written. Reminds me so much of my grandparents. Sometimes I still run across something that belonged to them. It causes me to pause and think about how much they still mean to me. Thanks for the article.

Also I think the idea for this site is a great one. I am 56 yo and was diagnosed with lung cancer this past June. Will be having a lobectomy Sept. 24.

Thanks so much for your comments, and welcome. I'm so glad you stopped by. Another thing I forgot to add about my inlaws is that they also held on to things, "for the kids." Just think - you never know when one of us might need a roaster from l948!! It's a kind of mindset and era that has passed....

I'll be thinking about you in the coming days with your surgery. Are you blogging? Are you on Twitter? That is a big surgery. My brother had a lobectomy this winter and is doing FINE now. His recent scans were all clear.

Sounds absolutely surreal to have all this laid out and then separated in a day, but how wonderful that these objects will soon find renewed use, and hopefully last another 50 years.

Thanks for sharing this story with us. It certainly sounds like quite the experience.

I think you're right that earlier generations don't/didn't have the throw away mentality that many seem to have today. After my mom died, we started going through things and I was amazed at some of the stuff we came across. This was even more so when we went through my grandparents' stuff years earlier. Of course, both times I snatched up some stuff, merely transferring it from one location to another. I found you have to be ready to let certain things go. I am pretty nostalgic about many items... Anyway, I'm glad you got your father-in-law settled into his new surroundings and survived auction day. Seeing the possessions of one's life all laid out for all to see is unusual indeed. That sentence says a lot doesn't it? Many of us relate to this sentimental post. Thanks for writing it.

We recently downsized our home from 2000 sq.ft. to 1200 sq. ft. and moved from the north to the deep south. I sold and gave to family and charities so many things that belonged to three generations. It was painful, but necessary.
Thank you for sharing about the auction of your grandparent's possessions. It was beautifully written.

Thank you all for your thoughts. It has me thinking still about our possessions, and as important, our relationship to them.

What's important? What can be used by another? Perhaps our society is just a tad too disposable.....