Much Needed Cancer Dialog Launched from Voices of Survivors Foundation 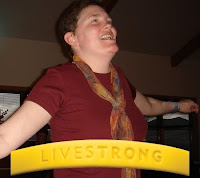 Talking about cancer can be difficult in the best of circumstances. Try living with extensive metastatic disease.

If that sentence alone conjures up images of hospitals and IV's think again. Today the Voices of Survivors Foundation launched a new initiative -- called "Conversations" -- that explores ALL aspects of cancer survivorship, including dying.

In the first segment, VOS executive director Lynn Lane talks with 37-year old Alli Ward, who has metastatic ovarian cancer that has spread throughout her body, including the brain. The interview will knock your socks off. Ward is authentic, funny and genuine as she talks about having to move back home, the loss of independence and having to ask her parents for rides since she can no longer drive. You'll feel that this incredible woman is a long-time friend. She teaches us all to look at the person, not the disease.

If you're not familiar with The Voices of Survivors Foundation, go to http://www.voicesofsurvivors.com. The nonprofit organization is the brainchild of Lynn Lane, a native Texas who was living in New York when he was diagnosed with prostate cancer at 41. After his treatment the former documentary film maker started filming survivors he'd met online when he was researching his own illness. Once the resulting clips were posted the incredible responses led him to devote his efforts to documenting survivorship -- in all forms -- on a full-time basis.

He is well known and widely respected in cancer circles and his work brings a fresh and much needed dimension to cancer survivorship.

Watch the video at: http://bit.ly/uPBsw and send a beautiful thought to Alli Ward.