My mind is stuffed with data - slides, posters and much more after attending the 35th annual San Antonio Breast Cancer Symposium last week, an international gathering covering everthing about the science of breast cancer.

Conferences like this are a conundrum: there are more sessions to attend and people to see than one person can possibly manage ... yet we know how vitally important the information is for women with triple negative, inflammatory and/or metastatic breast cancer. We all know women whose lives depend on what is happening in the translational research context and Phase III trials. We all want to have the chance to stand up to applaud, cheer and yell. This year there was polite applause. While I keep hearing the phrase - from lab to the clinic - there wasn't a lot for the woman having an appointment tomorrow. That is the truth from what I've studied so far. Knowing what is possible helps us understand how to pinpoint our advocacy.

Here are a few highlights: 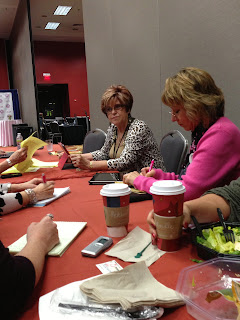 There's much more to come.  Thanks for reading,

From Cure Magazine on advocacy:
http://www.curetoday.com/index.cfm/fuseaction/blog.showIndex/kathylatour/2012/12/3/Breast-cancer-advocates-a-visible-presence-in-San-Antonio

With thanks to the Alamo Breast Cancer Foundation for the scholarship that made it possible for me to attend the 2012 San Antonio Breast Cancer Symposium.
Posted by Jody at Tuesday, December 11, 2012

Thank you for this thorough and thought-provoking summary, Jody. And for your tireless advocacy. And your eloquence. And that cute dog you have. :) Seriously, thanks for dedicating your life to moving this forward.

My dog is darned cute and a total nut case since I was gone close to a week.

And thank you for your comment - I learned so much more than I ever felt possible and feel it's imperative to pass it on:)

Jody - This is an amazing recap of this important event. You've inspired me to plan NOW to attend next year. There's so much information for breast cancer survivors to review that comes out of this conference. Thanks for taking the time to really shed some light on the key take-aways. It would be easy to get lost in this flood of info. I've learned so much from the tweets and posts you shared through out the conference. THANK YOU for this amazing effort to share with the breast cancer community.
-- alicia

What an incredibly educational summary of a very complex scientific meeting. Your ability to take complicated information and put it into proper perspective makes you a huge asset to the breast cancer community. Now please take a well-deserved break - even if it's just for a day or two!

For a jam-packed scheduler that I am, I REALLY appreciate your summary and highlights. What a generous service you perform! Thank you. I will be sharing your blog with clinical folks I am meeting at UNC---they need to read you.

Thanks for the great synopsis. My mind is spinning just reading this. Thank you for attending and for reporting back to the rest of us. I look forward to learning more. Thanks again.

This is an exceptional summary of the SABCS. Thank you so much for all that you are doing to promote advocacy.
Susan

When I read about the ATLAS study, I felt like I had been punched in the gut. I couldn't even last more than 6 months on Tamoxifen. I'm going to give it one more go, but I'm not optimistic. 10 years seems like a lifetime, and when you're in your 30s and might want to grow your family or even start a family (like 32 year old me), the idea of 10 years is just heartbreaking.

Cancer is caused due to uncontrollable cell growth which keep on multiplying. This causes a tumor which affects other organs functionalities. There are more then 200 types of cancer which a human body can get affected. Cancer can be treated well if diagnosed in earlier stages. Treatment of cancer can be radiation, chemotherapy and immunotherapy. I have searched some hospitals on cancer and got to know some of the good hospitals. You can visit here for more information.

thanks for this. Wish we had more results on metastatic patients, treatments for mets, etc. People wonder why we don't have a cure... it's so complicated. I would love to come to one of the conferences. Maybe someday... thank you for all you do!

Thank you all for your comments - and Lisa, much discussion w/in advocate community about advocacy for better understanding of metastatic disease. CJ Cornelius, of Metavivor was there working with doctors/researchers, as was (and I have temporarily forgotten her name) of the Metastatic Breast Cancer Network. This is so much of the work that happens behind the scenes.

We are all working hard on your behalf, and yes, I can't wait until you will be able to join us at SABCS and ASCO Breast. We need you:)

Also - when all of you see a "comment removed by moderator?" Then it's spam. I never deleted comments if someone disagrees with me or points out something I"ve missed.

That's why we have these conversations.

Genomic testing for breast cancer is getting better, helping to prevent unnecessary chemo and also better identifying the subtype. Here's the summary of a scientific poster from SABCS:

Such a relief to read a rationale summary of the news out of SABCS. I so appreciated your status reports, the voice of reason against a backdrop of silly hyped headlines, during the conference itself.

Yes, research is incremental, tedious, and studies have to be designed in such a way as to take something very complicated and make it very simple, so it can be measured. Doing research in grad school was an eye-opener in this regard.

There should be more advocacy involvement at these types of conferences, though. NCCN had a whole conference at the end of November on patient advocacy. I was disappointed not to be able to go, but I'm hoping they will have another. When they publish the transcript, I will post it for sure. Their conferences bring in research and apply it to the treatment context, as they are aimed at clinicians across the whole spectrum of care. Hope to go to one of them in the future.

We need advocacy at every turn.

Now, I hope you have some time to enjoy running about with Katie.

This is really great, Jody! Thank you for the recap. It's so hard to capture everything that's going on during the meeting if you're not there. I hate that I missed you, but hope you'll consider going again next year. Enjoy the downtime (You have downtime now, right?)

Thank you for this recap, Jody! Will post this on the Life-Cise FB page - such a clear, insightful roundup.
Julie

Awesome as always Jody. Thanks for your concise and understandable report of what you heard there. I feel so comforted knowing you and other advocates like you are out there to help people like me decipher all the information. Keep rocking and rolling my friend.
xo Deb

Doctors generally treat cancer of the gallbladder that has come back (recurred) in the same way as stage 3 or 4 gallbladder cancer. But your treatment will depend on whether you have had radiotherapy or surgery in the past. And on where your cancer has come back. There is a maximum amount of radiotherapy that you can have to any one part of your body. If you have too much iasdast can cause damage to healthy body tissues. So if you have had radiotherapy before, you may not be able to have it again. Gallbladder Cancer Symptoms

Advoacy at sabcs is described in the post here. Read details from here
Cosmetic Surgeons