Last Sunday the Discovery Channel launched a seven-part series, "The Frozen Planet," an epic documentary of the earth's polar regions and the very real threat posed by global warming.

I could spend the rest of my life watching television like this, or studying animals in general and dolphins in particular.

Dolphins stay in small units, or pods, and communicate via an elaborate system of whistles, clicks, and squeaks.  We all know about the squeaks from Flipper and bad Disney films. But their group behavior is something that can constantly teach us. 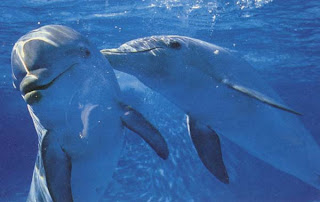 Instead of casting a weaker or ill member aside, as many other animals do, a pod of dolphins will often surround an ill dolphin and work as a team to bring her up to the surface for air to prevent her from drowning.  In other cases, bottlenose dolphins have been seen biting and pulling through nets to save a captured companion or staying close to a female dolphin in labor.

While these "empathy-based" behaviors are difficult not to anthropomorphize, I'm sure that's exactly what led a friend to leave us with a beautiful figurine of a dolphin leaping from the ocean's surface when she and her husband moved from our community to Florida several years ago. The dolphin was her gift to us.

The tightly knit pod, she said, reminded her of the breast cancer support group where we all met. And that when one of our members - first Theresa, then Judy - sickened and ultimately died - we all pulled together, and brought our ill friends to the surface for air, so they might breathe easier, if only for a moment. We stayed with them, by them, around them, until there was nothing else we could do. Then water, life-giving and always mysterious, flowed in to fill the space.

I just love this, Jody. It's perfect.

Gosh, Jody. Leave it to you to make me squirt a tear! By the way, in animal medicine, dolphins stand for higher breathing (as in reaching for higher consciousness), altruism, playfulness, and exploration. I think you hit the right mascot for BCSM.

I was concerned I was too morose; which is never my intent. The thought of all of us, swimming along, bound together and caring for each other as we go along? That carried me through the day.

Plus Lani pointed out tonight that it was Rachel who put the term "fearless friends" into our vocabulary via a tweet chat on January 23, 2012.....here are her tweets,

@ccchronicles Let's keep being fearless for all of us #bcsm and.

@ccchronicles The other thing abt living with mets, is our worlds start to shrink. That's where fearless friends are so important. #bcsm

She will ALWAYS be part of our conversation because her words are embedded in my thinking.

Oh Jody this made me cry. So beautiful. Thank you.

This is beautiful! I like the idea of the dolphin as our mascot, too....

I remember that tweet chat where Rach told us we needed to be fearless. That was her last chat.

Oh Jody, such a beautiful way to view our community. I'll never look at a dolphin the same way again. Thank you.

Absolutely beautiful my dear friend. Thanks for posting this lovely tribute to your friends. Great way to start my day.
Love, Deb ......one of your pod members

Oh my gosh, Jody. What a beautifully written post. I think it's a nice metaphor -- to see the breast cancer community as a pod of dolphins, ready to lift each other up and help each other.

Fearless friends is a wonderful expression. I, too, am missing Rachel. I also want to add: in memoriam of my friend Faun who died several years ago but is always fresh on my mind.

Beautiful post. I love dolphins and I love the cancer community.

This is so wonderfully eloquent and poignant. Thank you.

Thank you all, my friends.

You, like no other, know how to touch my heart and soul, make me smile and shed a tear. And that is exactly what you did with this blog, so beautiful and well written. It is a comfort to know you will be my dolphin when needed and I hope you know I'll be yours. Thank you, big hug, Annemieke

How fascinating, Jody. We can learn so much from the dolphins. Thank you so much for this beautiful reflection and symbolism. XX

The post is very nicely written and it contains many useful facts. I am happy to find your distinguished way of writing the post. Now you make it easy for me to understand and implement. Thanks for sharing with us. public liability insurance cost

Jody,
My priorities are 1) Spiritual Health, 2)Physical health (especially cancer) & 3) Financial Health. I was diagnosed with prostate cancer in 2001.
When you have time, please call me 832 671 6490 and/or visit www.mannybermas1.com

I am currently recovering from pancreatic cancer. Over a year ago I was told I had 3 to 4 months to live, but still am alive to share the experience. I never did join a support group because I was too sick, but have started a blog as an inspiration to others. gaylemadden.com.
Thanks for all of your hard work!

I just attended NBCC and remembered my time with Rachel & Susan. I connected with Rachel so much. In that short time she became my friend. I missed her tremendously yesterday as I remembered our time together last year. Thank you so much for this blog. I lived on an inter coastal waterway in Florida and the dolphins always swam together as I think we should- swim together in our fight for cures.

Dung Fu Donkey
hey that's really a great post and i like this and thanks for sharing it with us!I have read a few of the articles on your website now because I was looking for information aboutgames App. and I really like your style of blogging.