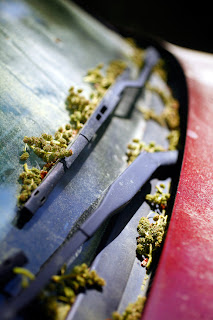 One of the lesser known facts about life in Texas:  the yellow haze.
Every spring, for about a week, the pollen descends.  It  covers cars like a thick dusting of snow. You track it across the kitchen floor, the cat drags it in, you wash it from the window screens and wash it off those nice new black pants. And if you suffer from allergies?  Kiss your usual face farewell.  I'd take a photo of what my eyes look like right now but I'd hate to make you spit out your coffee.
I was ruminating (yes, I've been known to ruminate, fulminate, and ponder about cancer related issues DAILY) about an emerging oddity in cancer culture a friend told me about Sunday. It's a new version of the blame game.
The blame game -- especially as far as women are concerned - has been with us ever since Eve. Its range stretches from "what did you do to deserve that?" to "what did you do to deserve THAT?"
Surely, this line of reasoning goes, you did something to get raped, abandoned, fired, or now, diagnosed with cancer.

Here's how it works.
Bad character, "You seem sorta down."
Good character, "I am.  The coolest woman I know is dying of esophageal cancer. I'm flying out to see her this weekend - probably for the last time."
Pause.  Bad character (how could I make this up?) "Did she smoke?"
Good character, looks at the other, runs character analytics, measures the metrics of the friendship. "No, and you can blow it out yours."

Another version:
Good character.  "But I can't believe it.  She's the healthiest person I know, eats organic food,  exercises.  All that. And this is her third bout with melanoma."
Bad character.  "Does she lay out?"
Again. Why would I make this up?

At best these exchanges are the grist for Miss Manners or the king of manners, Christopher Hichens.
At worst these cases bode poorly on the capacity of one person to have empathy for another, for the capacity to share, to be human.
When people use prevention messages to distance themselves from experiencing the pain of another's cancer, then we have more work to do than raise awareness.  Sometimes too much information is just that:  too much. Let's continue to deconstruct the fear so that people aren't so afraid of being diagnosed with cancer that they can't hear what another person is saying.
After my friend told me about this I took the dog for a long walk then sat down on the deck.  I put my hands down on the armchair without thinking.  They were covered with pollen.  It's like these inhuman reactions to real human suffering.  I so wanted to wash it all off.

Nailed it Jody. We've become so aware that we're now all experts on why people get cancer, and obviously it's something they did or didn't do! How wrong people can be and how heartless the message becomes. I'm so fed up. I agree with you. We need to do better. Much better. When "awareness" becomes a reason to "marginalize" and "blame" the pendulum has swung way too far I'm afraid. Time to go back to the drawing board and recalibrate the message.

I may have nailed it but you described it better than I did.

Just think about the difference the last decade has made.

When my friend's husband had quadruple by-pass surgery (ten years ago) I didn't say: "Didn't he eat a lot of Kentucky Fried Chicken?"

Are you kidding me? But in the same time frame, we now routinely run across comments like -- Did she smoke/drink/sun/sex/whatever????

Pads back down the hall, avoiding the pollen.
Love to you,
jms

Once again you gave me something to think about and once again I realize you are so right. My manager got diagnosed with leukemia when I was in Austin for the Challenge. When I came home I got told this horrible news and the per so telling me added, but she is a smoker. And even though this is true, it doesn't "justify" her getting cancer!! We seem to have the tendency to blame people for what happens to them so we don't have to acknowledge bad things do sometimes happen to good people and we might be affected by this disease as well despite trying to live a healthy live. There is soo much we need to get out and teach people. Your blog is another one I'll take with me and keep in mind when doing work for LiveSTRONG or being confronted with yet another person diagnosed with cancer. Thank you once again for teaching me, love Annemieke

You're welcome. I hate that response -- but she smoked? Well, yes, but this person has cancer. What happens there is you have loss the chance to have a conversation with the friend you mentioned this to about the loss you're feeling. Such a response eliminates the opportunity to share in a real way.

We really need to think about this, and ways to handle these conversations that diffuse the hurt and fear. Not to mention the knee-jerk response to slap the other person across the face!

You're the best. I learn from you, too.
love,
jms

I'm a firm believer in thinking before I speak. I'll even go so far as to say that I remain silent when I don't know what to say, rather than parroting some platitude. I wish the bad characters of this world could understand how insensitive their knee-jerk diagnosis really is. People really need more emotional education.

Jody, so perfectly said and exactly right. Some people are so afraid of having cancer happen to them, they search for something to separate them from the other person. As if by finding something to blame makes them safe. I never realized this fear was preventing some from really listening. I need to be more aware of that. Thanks for this.

I'm not sure how much of it is _always_ blame on the side of the "bad character," but part of me thinks that the reaction to ask for a "cause" stems from human curiosity and wanting to know there is an answer. It's so hard to comprehend when bad things happen that there wasn't some sort of trigger - not to blame, but to know what the cause was to avoid it.

Like I said, I'm not saying that everyone who asks that is innocently seeking the bullet to dodge that the "good" character's friend was hit with. Surely, some are looking to blame the individual.

But, perhaps I'm playing devil's advocate here, it may also just be to seek out the root of where it came from.

I'm also not excusing how inappropriate it can be.

(Yeah, I'm the idiot who still tries to seek the good in people even when they do loathsome and stupid things.)

Great post Jody. I do think it is fear talking a lot of the time when people say those sorts of things. Fear and ignorance, what a horrendous combination. I remember when I told a client about my cancer he said, "But you are such a nice person, you don't deserve anything like that." (I didn't realize he too was a cancer survivor who probably felt that he was not such a nice person and in some way he did deserve it - sad to say) I said, "No one deserves this - period."
Unfortunately cancer happens and people get scared stupid. Not an excuse for talking stupid though.
Love, Deb

Jody,
The blame game is such a waste of time isn't it? Even though I know it is, sometimes I am my own worst enemy in this. So often I hear how cancer can be prevented and I feel like such a failure...

And that lovely pollen stuff shows up around here probably in June. Can't wait...

Jody,
Great post! When I think about my diagnosis and treatment and the amount of time I wasted trying to prove that I didn't do anything to "get" cancer, it makes me angry. I work in wellness and I am a nurse, I was doing the "9 things" to prevent cancer. My take on cancer is: cancer happens!
I have to wonder if people don't make comments to justify someone's cause in developing cancer because of a sense of delusion, "well I don't do that so I will be safe." Just wondering??
Thanks for bringing awareness to a sensitive and often times hurtful topic.

You are so insightful, and you are right about the blame game, especially as it relates to women. Women who get cancer are more likely to be blamed. For example, with breast cancer, we get blamed for not eating right, for smoking, for not having kids at an early age, etc., etc.

The list doesn't end. I don't see the same blame going on for men with cancer.

I think this is merely denial. I find in with every instance in life that is negative. I lost my job six months ago and it amazes me how many people say "But you aren't really looking, that's why you are not working." It is difficult for people who are currently working to deal with the fact that their job may also disappear. The same goes with health issues. If I can blame cancer on someone smoking then I can think, "Whew! Now it won't happen to me. I am safe. I am okay. I will live forever." It is a natural reaction and our first defense mechanism in dealing with grief. And really, accepting that one day I may die of cancer and nothing I do can stop this, is very sad.

You have hit it precisely!! Reading this was like looking in the mirror, as I feel exactly that way and wrote a similar type of posting similarly titled, "Breast Cancer and the Blame Game."

It's really nice for being here..great topics