Three weeks ago today Steve underwent surgery at MD Anderson for a wide excision and immediate construction of a recurrent melanoma on his lower left ear. After the cancer was removed by Dr. Ross, Dr. Kronowitz cut and secured a skin flap that in essence connects the ear to his neck.  Now we’re waiting for two things 1) assuring that the flap remains healthy and 2) for a secure blood supply to establish from the ear to the flap, and not the other way around.  Dr. Kronowitz then removed cartilage from his good ear so it won’t look like (in our terms) a “skin blob.”  When I was able to join Steve in the recovery his entire head was bandaged but he was sitting up, blinking ointment from his eyes and eating a graham cracker.  He was calm, alert (sorta) completely without pain or nausea.  Beautifully done, I thought.
Every hospital experience is different.
For Steve’s recent surgery it seemed as though we'd scored a home-run. Everything went better than expected, from the moment we hit the out-patient surgical department at MD Anderson’s Mays Clinic at 6:30 am on January 31 to the moment we left some 24 hours later. After a boatload of collective cancers I felt like the sun landed on us.
The morning we went in was humid and warm; the day we returned home a winter storm had muscled its way throught the warm Gulf air and dropped the temperature thirty degrees. What a difference a day makes.
What you quickly recognize as a survivor is how much surgery and hospital care spins on attentiveness and intricate detail – someone’s deft skill in starting an IV, a surgeon’s on-the-spot innovation, the tech who follows each aspect of his or her protocol right down to dotting every “I” and “t” that assures that needed medicine, supplies, or test results are in place when needed.  Many of the factors contributing to a “good outcome” aren’t immediately apparent to us as survivors or co-survivors. We know if we have to wait, if the receptionist is polite, if the physician’s nurse is someone we enjoy talking with, or if the PA cops an attitude. Experience and knowledge fill in the blanks.
It had been eight years since either one of us has had major surgery.  Here’s what was different and how the advent of social media platforms changed my perspective.
1) Innovation of the Obvious: Tag Team Pre-Op
Never have I seen so many people checking, double-checking and tag-teaming each other to facilitate the pre-op process, from fellows and PA’s for both surgeons, people from anesthesiology, a tech whose sole purpose seemed to be monitoring his awesome blood pressure, to the others who poked their heads around the curtain and smiled hello.  It was such a revolving door there was no time to be nervous. This was also the first time I could clearly see how the system worked.  Each player was there to confirm the obvious: Steve’s procedure and his or her role in it, period.
Two things really struck me. The first was the anesthetist who came to start the IV.  First she warmed his arm with a blanket, chatting and rat-a-tat tapping his veins. What she learned in a short time is Steve’s own tale of “IV’s that failed.”  There isn’t a survivor on the planet without a collection of these little gems.  It even took me a moment to realize how much she listened, because she stepped out quickly and returned with the anesthesiologist.  He, in turn, talked  with Steve while she had the IV in on the next heartbeat.  Later, she tells me that after she'd heard what had happened before she'd already decided to only stick him once. She'd asked the anesthesiologist to step in, just in case.  How is that for patient-centered care?  Gold star.

The other revelation was the beauty of the obvious.  When a wonderful nurse with a commanding presence, stepped in and said gently, in a matter-of fact way, "there are going to be a lot of people coming in here and asking you the same question, so bear with us” it was an Einstein moment.  Healthcare professionals should never forget how beautiful simple statements can be. Of course. A lot of people are asking me the obvious to make sure I get the best possible care.  A team that's all on the same page is the team I want working on my family.
2) Out-Patient/23-Hour Admission:  Room Without a View
Our experience as 23-hour admissions in l998 and then in 2003 were abysmal. I prepared for this one.  I packed a change of clothes to keep me comfortable and enough reading material to last me through the end of the year. I stuffed in my pillow, slippers and reading light.
I geared up mentally. Fortunately, I need not have worried. Unlike the last time, all 23-hour admissions are now located in the same area where out patients recover from their surgery. This means the nurse to patient ratio (there were only six rooms) was absolutely stellar. Had anything been wrong -- and there wasn't - the nurses were twenty feet away, working at their computers.

From our perspective there were glimmers of the EMR, or electronic medical record.  Most of these were apparent when something didn't work, for example, when a nurse in one department didn't record (hit enter?) the very same data the nurse in the next department wanted to know. Information like prior surgical history -- especially at the same facility - should be duck soup, wouldn't you think?
What I noticed:  all data from the recovery room and pre-op area went directly into the computer, even tho staff in pre-op had print-outs for their own notes.  This makes sense.  In surgery, where the consequences of mistakes can be dire, everything has to be documented to protect the hospital.  And the patient.  In this arena: attorneys rule, and will continue to rule, maybe even facilitating greater and more wide-spread EMR adoption? Who knows.
Simple things, that make the patient's life easier but have no impact on bottom line or direct quality control?  Not the same attentiveness. Different departments within the same same facility schedule and post follow-up appointments (to the patient portal) at really different rates; from the day the order is given by the physician to up to four days later.  You can call all you want to.  It still takes a person to pick up messages and respond.
4) How did social media impact this experience?
In an immediate way, it didn't at all, even though it was everywhere. 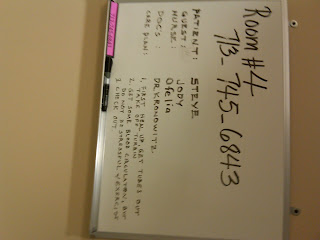 Nothing regarding the surgery, physicians or facility were influenced by social media but how I handled it certainly was, from sending messages via DM on Twitter to posting a photo of Steve's nurses on Facebook (they loved being asked for a photo, BTW).   Support for both of us rolled in
from both platforms.  Priceless.


Steve's still prefers his own social media platform: the hospital message board.  Literally.  He filled in his own within a few hours of being transferred to his room.


Thanks for your continued support,
Jody

Today as I was writing this the dialog on #hcsm, #EMR and health apps continued at a non-stop rate on Twitter from the irrepresible @HealthIsSocial "The Killer Healthcare App" to today's post from @KevinMD   "How EMRs are failing nurses"
Posted by Jody at Tuesday, February 22, 2011

Most excellent post. You beautifully captured an intricate dance that looks easy when completed by skilled healthcare professionals. It's abysmal (and deadly) when missed steps occur.

I must say MD Anderson has refined cancer care and is a stellar system.

By the way, I love that you asked, took, and posted a pic of his nurses. What a great way to say "these people are amazing." at least, I think so. :)

Oh, and best wishes for recovery!

Jody,
So many of us have the hospital stories from Hell. It's comforting and impressive to see what the patient/care ratio was, how efficient and engaged everyone was.

Next week I'm taking one of my blog readers to the hospital for her 23-hour breast "revision" surgery and staying with her. Even though she lives 7 hours away, we met online, have had dinner together and visit on the phone frequently. Other than breast cancer and the same surgeons, we have so much in common. Social media has brought me so many wonderful new friends, like you.

So thrilled Steve's surgery went well and am hoping his healing continues.

Great Blog. The World Health Organization has identified the role medical tourism in Asia in providing quality healthcare services at a much lower cost to the overall health and wellbeing of every individual human being all around the world.

loved this blog and your vision on this "new" experience. I do think you left out one crucial factor though: the fact that both you and Steve are survivors in the true sense of the word and go in with optimism and the right frame of mind. Deeply admire you both and very happy that the surgery went well. Keeping me fingers crossed for the rest of the procedure. Big hug and love, Annemieke

Great post Jody! It can be amazing to experience something so changeable as surgery in a major hospital and your perspective on the changes compared to the past was awesome. When someone like you takes the time to share their experience and perspective it really can help so many people and really open up the eyes and minds. Thanks for that.
Love, Deb

Jody, Nice post here showing the significance of what might appear to be minor changes. I'm happy you guys had such a positive experience, not that any cancer surgey is positive. Maybe the medical community is slowing starting to "get it." I like Steve's personal message board the best!! Hope things continue to go well for you both!

Welldone,I got useful information from your Blog.I will share this on facebook.Points Rummy

I was searching some thing relevant to this, And i am feeling lucky, as its the perfect one for what i am looking for. I will share this. six sigma training

Your post is truly informative for me and i am so grateful to you for sharing this informative post here. really great job done by you.

Thanks for the update.There is a scope to reach out for the best with the power of information in our hands that i got from your blog.
zodiac signs

I am agree with your Blog.Thanks for the useful information.I have been reading a lot of stuff about it. but the way in it is presented is nice.Here is the information about Video advertising.

Welldone, very interesting blog .I praised your blog for giving such a useful information.keep it up.
Online Jewellery Shopping

Very true.Such a nice concept. Your information is true up to great most of the extent. Thanks for sharing.Thanks for the useful information.Such a inspirable and good post . I am able to get new knowledge while reading this . Keep sharing this type of informative posts.