A Mother's legacy: did her cancer help cure mine? 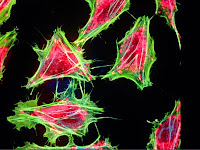 In l951, some twenty years before President Nixon would declare war on cancer, a technician at John Hopkins Hospital in Baltimore meticulously cut a biopsy sample into one-millimeter squares, covered them with a culture medium developed in the same lab, sealed them in test tubes and put the tubes in an  incubator.
The lab assistant had done this hundreds of times before, in an attempt to establish an infinite line of cells -- the Holy Grail in medicine then – for research.

Photo from:  www.rebeccaskloot.com/ photo by KJ Murti
Posted by Jody at Sunday, May 09, 2010

Wow, you've done it again. This very well written blog has left me with many questions to answer but most of al with enough new information that triggers me to go out and find and read the book you talk about. I can't believe this has happened to this poor lady and her family and than again I can, putting it in the context of the day and age she lived in. That doesn't make it right but does sort of explain it. I do believe that this lady has contributed, unknowingly, to curing or partly curing others. Too bad she and her family didn't benefit. I can't imagine what her kids went through growing up without a mom and am so grateful I still have mine. Thank you for teaching me again. Big hug, Annemieke

Thank you, Jody, for this and other blogs. Megan had tweeted about this post, and I'm glad I followed that pointer. Then I was further moved to see Anne's name in your memorial. Thank you.
Bruce Robinson

Jody, what a story! You find some of the most amazing stories to share with your readers. It makes me think of how far we have come in the field of research via this woman. Far...sometimes I think to far with all the govt. regulations that are impossed on say medicine where the waiting period is too late for some.

Also the truth of it is not what you ask but how you ask it using the right "Hospital lingo" to get the correct answer. Thanks for the thoughts! Hugs today..Luann

Wow Jody, this is another incredibly piece of writing with such terrific information..talk about a mother's day post with a difference!

Thank you all for your comment. I do so encourage to read the book -- it flies along like a mystery! I've barely touched the surface.

Come back and visit again soon!

Bruce, really thrilled you stopped by. Anne made a last impression on me in the short time I knew her. Megan and I talk about her often. Hugs to you.
jms

Thanks for this great post Jody. I have heard about this story but now have enough info to know I must get it and read it. What a tangled web of medicine, race, health care, patients rights and family issues, among many other things. It shows that so much in life is inter-connected, as are so many of us.
Love, Deb

Jody,
What a phenomenal book!! I need a book to read on an airplane & will get a copy. The title of this blog is also very thought provoking. Thank you.
Brenda
BreastCancerSisterhood.com

Thank you, Jody for having shared this fantastic article. Wow! I came about the book by accident; however, I've known about Henrietta Lacks for many years; I first read a story about her in "The Afro American" newspaper, and again years later. I remember having read that Mrs. Lacks' cells were in Russia even! And, that was before the iron curtain came down. I am into names, so when I came upon the last name, "Lacks" it dawned on me that I know a family in Baltimore by that name, and sure enough it is the same family. I will be contacting them, soon. I am a 7-year breast cancer survivor. Wouldn't it be something if Mrs. Lacks' cells cured my cancer!? Wow!

Its one of my favorite post. Its also helpful topic for newbie. Thanks a lot for informative information. Also biomat is need for you or your friends.