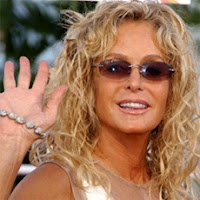 American icon and Emmy-award winning actress Farah Fawcett was notably absent in the traditional memorial included each year as part of the annual Academy Awards ceremony, which aired last Sunday.   Roger  Ebert, writing on Twitter, quickly noted,  "No Farrah Fawcett in the memorial tribute? Major fail."
Major fail is right.  From a purely historical standpoint, based on the length or her career and her social impact she should have been there, along with Bea Arthur.
But perhaps the omission it as it should be.  Like icons before her (Marilyn Monroe comes to mind) Ms. Fawcett did not seem like part of Hollywood, or even of Hollywood.  In both cases, separating the woman from the image became as intriguing as the image itself.
In the real world I think Ms. Fawcett was an incredible artist who unintentionally saved her best public work until last.
She gave the most extraordinary gift of her intelligence, grace and spirit in "Farrah's Story," the no-holes-barred documentary that chronicled her struggle with the cancer that prematurely ended her life last summer.  Both she and Michael Jackson died on the same day.
In 2006 Ms. Fawcett was diagnosed with anal cancer, one of those cancers people don't talk about very much, if at all.  In the last 30 years its incidence has risen by 78% in women, according to an article in US News & World Report.   While only one in 640 women will be diagnosed with anal cancer over the course of their lifetime, not even half of anal cancers are detected early, when they are most easily treated.
The fact that this engaging woman, who fought on many fronts to retain her privacy, chose to let us in on this last chapter of her life certainly says more than I can. "Farrah's Story" shows us a rare courage and also the unflinching nature of enduring friendship and love. Alana Stewart is by her side filming through treatments, illness, laughter and tears.  If you've had cancer, you know what these moments feel like.  Of all the moments shared, one of my favorite is one all of us can identify with:  the two friends cooking dinner and laughter in the kitchen.
When the Academy of Motion Pictures Arts and Sciences decided "....that we can't include everybody" in their "memoriam" they rendered the rest of the segment meaningless.
So to Ms. Fawcett?  What a life you lived.  Thank you.
Posted by Jody at Tuesday, March 09, 2010

Beautifully put my dear friend. This is a fitting tribute to Farah the survivor that you have written here. Thank you!
Love, Deb

Thank you, Deb. I was so moved when I watched her story last spring; it seemed impossible for me to describe then. But when I heard about the Academy Award fail earlier this week I needed to write about it.

Good thing you wrote about this and again a beautiful post. It was bad enough her death was almost second hand news because of the hype of Michael Jacksons death. Being left out of the Oscars is insulting to all of the cancer angels. Thank you for this, her very own tribute. Annemieke

Ms Fawcett lived her life by this motto "It's only when we truly know and understand that we have a limited time on earth - and that we have no way of knowing when our time is up, we will then begin to live each day to the fullest, as if it was the only one we had."

She should be pleased to know we still care for her honor and her legacy.